As a strategy to control and avert the implication of rapid population growth in order to achieve sustainable development goals, stakeholders have called for increased budgetary allocation for family planning as Nigeria joins the rest of the work to mark 2017 World Population Day (WPD).

Speaking on the 2017 WPD theme, Family Planning, Birth Spacing: Empowering People, Developing Nations, in a recent release by National Population Commission (NPC), its Chairman, Chief Eze Duruiheoma, stated that family planning and birth spacing are measures to attain a sustainable family size by way of allowing for adequate intervals between births, employing especially the use of contraception.

Eze said that, “Family planning is not only about saving lives but also empowering people and developing nations. Family and birth spacing are personal decisions but their profound implication on health, economic and social wellbeing of the society are far reaching. That is why simple individual decision has become a developmental agenda that must be addressed on a sustainable”.

Nigeria’s population is expected to surpass that of the US by 2050, according to new UN projections that predict the West African country could be the world’s third most populous by the end of this century. The 2013 NDHS results indicate that the TFR is 5.5 births per woman. This means that, on average, Nigerian women will give birth to 5.5 children by the end of their childbearing years meanwhile the goal of the National Policy on Population for Sustainable Development is to achieve a reduction in the total fertility rate of at least 0.6 children every five years (National Population Commission, 2004).

In a report by Matt Lesso on the Borgen Project, Nigeria is struggling with over population and most residents of cities like Lagos live in severely overcrowded slums. Many houses and apartments consist of just one room to house entire families. More than 50 people can share a bathroom, sink and living space. Youth unemployment in urban areas is around 50 percent. This has fuelled an increase in crime which is rampant in many cities. This high level of youth unemployment has also helped fuel the rise of militant groups like Boko Haram.  Whereas Nigeria’s fertility rate is approximately 5.5 children per woman i.e. a woman can still give birth to 5 or more children with/ without the means of providing for them.

Many fear this rise in population growth will fuel poverty, hunger and civil strife. But the problems will be particularly acute in Nigeria. While some view this increase in population as a potential for more economic growth and status as a global hegemon, many others fear the population boom will cause the country to collapse. With family planning, population growth can be controlled starting with individual family deciding how many children it can cater for, when to birth them and how to space them. In a statement reiterated by the Lagos State Team Leader of the Nigerian Urban Reproductive Health Initiative, NURHI, Dr Omasanjuwa Edun has said that family planning is designed to help the family have quality life contrary to speculations that it was instituted to discourage procreation.
According to World Health Organization, Family planning reinforces people’s rights to determine the number and spacing of their children, Family planning can be used to reduce maternal mortality which is currently at 555/100,000 live births in Nigeria (NDHS 2013) because by preventing unintended pregnancy, family planning /contraception prevents deaths of mothers and children. With a well-planned family, parents are also able to take adequate care of children they already have.

Research has shown that Family planning has a negative reputation among many Nigerians. Many have the misconception that family planning is all about reducing number of children to be birthed using risky medical interventions that can potentially cause major complication in women such as infertility, however family planning simply provides a safe, affordable and effective way to have children when you want them, and provide a period of ‘rest’ for mothers in between pregnancies.

In a statement made by Mrs Toyin Saraki Wellbeing Foundation founder, “Family planning information and contraception is a fundamental human right, empowering women to decide when and where to have a child, and how many children they wish to bear, according to their circumstances, we recommend that mothers space their childbirth by 1000 days, to better sustain the health and socio-economic wellbeing of mother, child and family.”

However to provide family planning services the Government needs to; Increase funding for Family Planning and ensure increase in budgetary allocations for FP/CBS in the state to cover consumables, supplies and infrastructure, commodity, logistics, management, training of skilled providers and demand creation.

Global World Population Day is celebrated on July 11th every year. It is a global day to focus attention on the urgency and importance of population issues and this year’s theme is emphasizing how access to safe, voluntary family planning is a human right. It is also central to gender equality and women’s empowerment, Devcoms joins the rest of the world to commemorate this day as the health and wellbeing of a woman is vital to the wellbeing of a nation.

In Yoruba culture, songs and dance have so much importance to religious worship and spirituality. All Orisas holds particular importance in dance and songs. And Worship in African Traditional Religion take the form of rites and ceremonies and include prostrating, praying, invoking, and making offerings. Sounding the bell or gong, singing, drumming, and dancing as occasion demands. Song and dance come up under liturgy. Liturgy therefore, is an important element of worship in African Traditional Religion.

In Orisa Worship, the presence of dance as a way of reenacting spirituality and songs as a way of reverence to the power of Olodumare and Orisas are essential to the worship of Orisas. Each Orisa is identified with drum ensemble, songs and dance styles. Also, every Orisa has unique dance movement that reflects its attributes as we have different drums for each Orisa. That is, the musical instruments used for each Orisa is different. The musical instrument for Sango and Yemoja is bata, Ifa is for Agogo and other Orisas is Dundun.

Songs enhance emotional and physical participation in the act of worship and often lead to ecstatic experiences. During worship when the singing and dancing penetrate wholly into every being of the worshipper, spirit possession may follow and the possessed devotee may give message from the divinity (as a vehicle of communication btw us and orisa) lighter songs may occur during the ritual. Also certain songs dedicated to the divinities are song in their honour as occasion demand. These songs are rendered to show the qualities and nature of the particular divinity. The characteristics of the divinity are also revealed through songs rendered during worship. The officiating priests never forget the order in which they should be song. 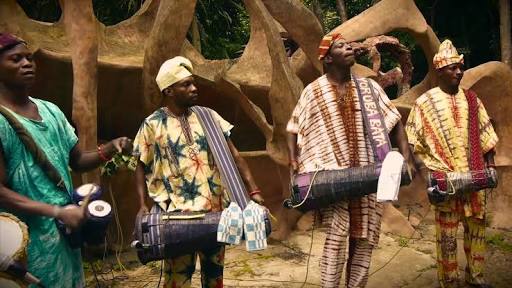 Dancing on the other hand is no less prominent during worship than songs. There is therefore a place for dancing in the rituals especially during the sacred day worship and during the annual festival celebration. The dances take definite form, depending on the divinities to which the offerings are made. The dances which are ritualistic in nature is more emotional responses to the rhythm of music, they are symbolic and revealed something sacred. Most of the dance are fixed patterns and must be done correctly. Which foot goes forward first, which movement of the hand and body accompanying it, which turns are taken next, and how many times each component of the pattern is to be repeated; all these must be carefully observed.

In conclusion, When the musical instruments are played and danced to, it brings spiritual inspiration and relief to man.

She can be reached here @ifawemimo