In this last public appearance, he read to the assembled troops, many of them illiterate, from his draft of what would become the most famous chapter in “ Wretched of the Earth ”, about the pitfalls of national consciousness.

He described how the national bourgeoisie, after independence, is only too happy to accept what crumbs the departing colonial powers throw to it. Without social reform, without political and economic transformation, he warned, national liberation would be an empty shell.

I was invited for a  Weekly #Thursday  film screening at the Institute of African Studies University of Ibadan, and after good consideration and mostly importantly been drawn in by the title of the film to be screened, I couldn’t but plan my day, in fact my subsequent Thursday evenings 5:00pm for the next few weeks to attend these  film screenings. Today’s turned out to be refreshing on the cruelty Africans had and continues to suffer from the Europeans, how they had successfully with the creation of  class/strata to accrue certain privileges to those who are supposed to be the mouthpiece for the common man’s grievances.

I remember all through the screening while trying to put down some points from the narration and interviews which cuts across  gender dynamics, the inherent counter-violence breed in slighting for solution through violence, the attitude of the colonialist, the near lost hope of winning the battle by the Guerrillas,  the perceived emptiness of the future.
‘We have Suffered!!!
Africans have Suffered.

I mean a young lady of about 15-18 years lost her right upper limb while her infant lost his left lower limb in the Mozambique resistance war against the Portuguese. The sight of this alone is disheartening, coupled with the exploration and exploitation of our God given ‘blessings’ turned curse’ ‘Mineral Resources’

I could continue sharing what I felt watching the movie but I think I should share some of my reflection and interpretation of the sequence of events as shown in the film in no particular order as I hurriedly put them into #140 characters to share my experience with folks on twitter.

So in 1966, William Tubman Liberia’s president was smoking while having interview on a national tv,on the attitude of Native workers @LAMCO

Men and women fought alongside, they were both commanders and see themselves as equals on the same level.

Burkina Faso: when asked what  is democracy ? – ‘I believe in the people, as a strength and force….’ Thomas Sankara

In which country has the IMF succeeded, Nowhere! they Set troublesome conditions.

The European games is finally over,
We should help ourselves without competing with Europe #Decolonization

In trying to live up to it(European Standard), USA became a monster where Taints, sickness and inhumanity of Europe have grown to its appalling dimensions. 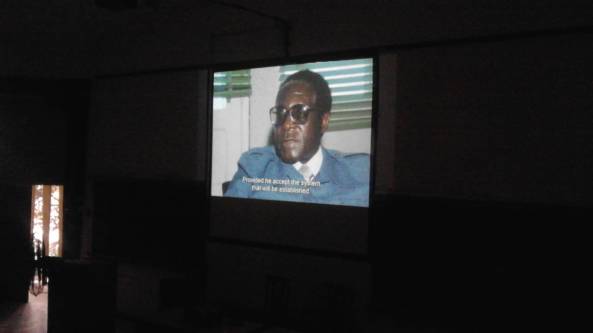 Robert Mugabe in his hey days, speaking on how Africans should work together for their emancipation. Who will emancipate Zimbabweans from Mugabe Now!!!

Comrades We must invent, make discoveries for ourselves, for Europe and humanity. #Decolonization

Let your scholarship ignite in you the fire that will liberate you, your society and mankind, let it emancipate you. – Dr Jegede Ethno- Medicine Unit, IAS, Unibadan.

So next weeks Film Screening will be on Gender dynamics/issues, I will be giving you update soon.